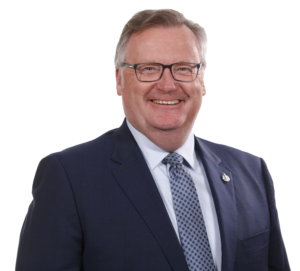 Kevin Waugh is the Member of Parliament for Saskatoon-Grasswood. Born and raised in Saskatoon, Kevin has proudly called the city home for most of his life.

Kevin has been an active community member for four decades, supporting many organizations and sitting on the boards of several non-profits. His involvement includes fundraising for a variety of children’s initiatives such as the YMCA Strong Kids program, which allows children to get involved in summer camps when they might otherwise not be able to. For his efforts in the community, Kevin received the Saskatchewan Centennial Medal for “long standing community involvement”.

Prior to running for Federal Office in 2015, Kevin served as a trustee with the Saskatoon Board of Education from 2006 to 2015, including terms on the Saskatchewan School Boards Association Executive.

After a long career in sports broadcasting, Kevin was elected Member of Parliament for Saskatoon-Grasswood in October 2015. He is currently the Deputy Shadow Minister for Canadian Heritage and has previously served as Deputy Shadow Minister for Indigenous Affairs. After being re-elected in 2019, Kevin was elected by his colleagues to serve as the Chair of the Conservative Party of Canada’s Saskatchewan Caucus.

Kevin and his wife Ann have two children, Geoff and Courtney, and two grandchildren.